Skip to content
‘Coaching is about much more than just teaching children how to play football’
Tuesday, 1st October 2019  |  BFC Soccer Schools

BFC Soccer Schools Coach and First Team Analyst Alwin Lawrence Took A Big U-turn When He Left His Corporate Cubicle And Picked Up A Camera To Follow The Blues Across The Country. We Spoke To Him About His Journey In Football, And His Experience With BFC Soccer Schools…

When Alwin Lawrence’s neighbour handed him a pair of worn out football shoes because he’d outgrown them, the then nine-year-old didn’t make much of it. He had already been playing with a tennis ball at the Nandhan Grounds, but getting a pair of shoes meant that he would now be playing with an actual football. And that’s where it all began.

“I was about nine years old, playing barefoot in my neighbourhood and other mud grounds in the city. When my neighbour gave me a pair of his football shoes because he had outgrown them, it was the beginning of a long journey. This sport has played an important part in my life in terms of making me who I am today.”

After completing his studies at the St. Joseph’s Boys’ High School, Alwin became a data analyst at a reputed company and even moved abroad to pursue career opportunities. That’s when football came calling.

“Convincing myself that a career could be made out of being a football analyst in India was not easy. I was only the third analyst in the whole country when I joined BFC. Then, after convincing myself, I had to convince my parents and peers around me that it was a viable career move. At a time when going the corporate way was considered the safest, I had to break the stereotype,” Alwin recalls.

In 2013, Alwin joined as the Football Analyst under then Head Coach Ashley Westwood. It was no child’s play, as Alwin would soon discover. “One of biggest challenges was getting used to the relentless pace at which things worked at Bengaluru FC. I’d spend hours in front of my laptop sifting through games and portions of matches that would be important and then, just when I thought I could take a breather, we’d be at it again. It’s tough, yes. But I enjoy every second of it.”

A member of the club’s first ever Backroom Staff, Alwin is the only person to have worked with the three Head Coaches that have been at the helm for the Blues since the club’s inception in 2013.

“I have been lucky enough to work under three different coaches. Two of which had contrasting philosophies and styles of working. Understanding terminologies, specific patterns of play and why they say what they saw was a bit of a challenge to start off with. Working under Ashley (Westwood) and Pradhyum (Reddy) helped me massively, because it set my standards and priorities right in terms of how everything had to be done on the professional front. Then, that was what set me up for the way I work even to this day. Under Albert Roca, initially, it would be difficult for me to understand the way he saw and read the game. The language was a bit of a barrier at the start, but I had to sit long hours with him and Carles watching games after games discussing movements to understand the way he saw the game.” 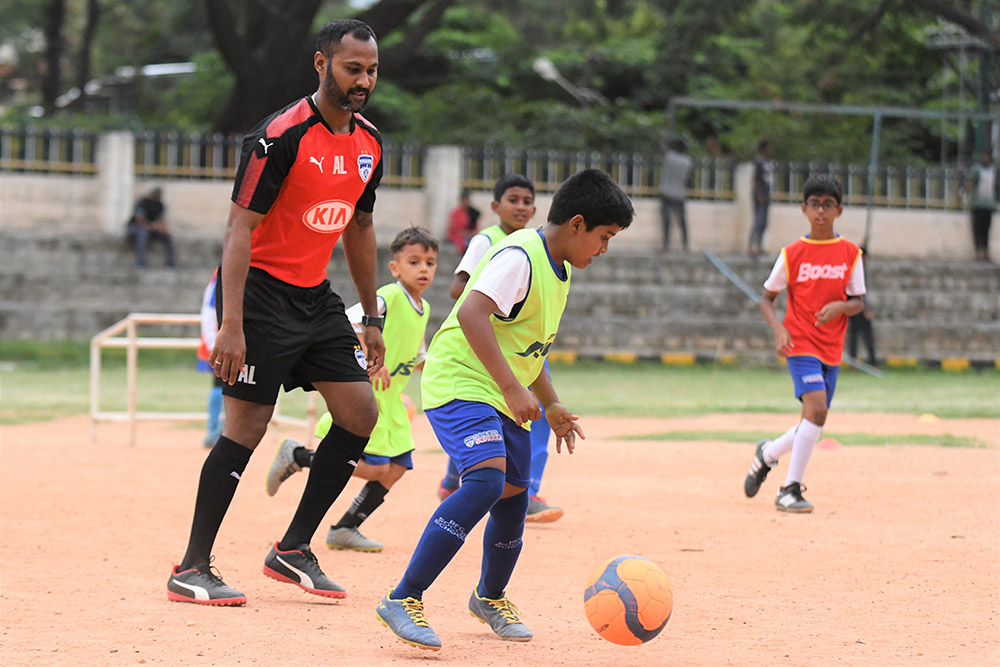 As a player, Alwin Lawrence turned out for Nationals FC, BWSSB and Dharmaraja Union in the BDFA Leagues.

But when the balls and bibs are packed at the end of every campaign, Alwin found himself wanting to do more with his time. Several trips on his bike have been made and finally, earlier this year, the 34-year-old completed his coaching badges and joined as a trainer with BFC Soccer Schools.

“The thought of coaching was always on my mind since the time I started off with BFC. But, two knee surgeries had me postponing my plans of completing my badges. I always wanted to be able to transfer whatever knowledge I gained and learnt as a footballer and as an Analyst to the kids, and I felt this was the best possible way.”

From keeping a keen eye on Chhetri and Udanta running down the flanks, to watching closely to identify and correct the little ones who could go on to wear the Blues’ shirt, Alwin feels at home on the field, as much as he does behind the lens.

“As a coach, one of the biggest challenges is assessing the young ones. Every child comes with different abilities and skills. Some of them have to be taught basics right from scratch and some of them are already good players. As a coach, it is a challenge to find middle ground, where the good ones have to keep improving, and the ones starting to learn also have to get on par. Keeping things simple, keeping everyone engaged without getting bored is key as a coach. One of the biggest takeaways for me has been about learning how to be patient. I’ve learned that not all kids can be gauged the same way and different kids have different abilities and ways of learning.”

So, does being the Club’s First Team Analyst help him impart that little more knowledge than other coaches? “Coaching is about much more than just teaching children how to play football. I’ve been fortunate to witness the sacrifices and commitment that our first team players have made in order to get to where they are. These are things I like to explain to the little ones, who always look up to the players as role models and icons and try to emulate them. Stories of how players take care of their diets, about their disciplined lifestyle, the hard work they put in and how they carry themselves, is something all the kids love listening to, and I’m more than glad that I am able to tell them!”