Bengaluru: Their journey to the Blues’ Academy side have stark contrasts, but U13 midfielders Parikram Borah and Gautam Rajesh have both made it to the Karnataka State U14 team, set to play in the 15th Sub Junior Nationals in Hyderabad, where they take on Pondicherry and Telangana in qualifiers.

“It’s a really big opportunity for these boys to play competitive games, and gain experience, and being among the youngest in the squad means they can play against some physical players, which will improve their game,” said Rajan Mani, Head Coach of the BFC U13s.

While Parikram joined the Blues over two years ago, having been through two sets of trials to make it to the U11 side in 2016, Gautam was scouted from the 2018 edition of the Boost BFC Inter School Soccer Shield, where he was part of the victorious DPS East team. 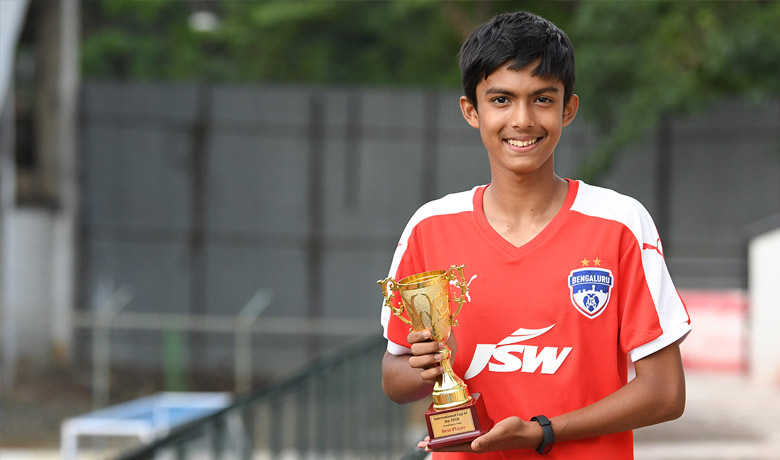 BFC U13s captain Parikram Borah was adjudged player of the tournament at the recently concluded International Cup of Joy, in Coimbatore.

“I had heard about Bengaluru FC a lot but I never thought that I would get a chance to play for them. Playing in that tournament changed everything for me, to be honest. The training sessions at BFC are very intense and keeps you prepared for the real games. I’m really thankful to the coaches who scouted me,” said Gautam.

Parikram, who is captain of the Blues’ U13 team, was adjudged the player of the tournament at the recently concluded International Cup of Joy, in Coimbatore, where the Blues’ ended as runners up. The 13-year-old says that he has improved massively since joining the Blues youth side.

“I have improved my game, and in many ways, mentally as well. I am now thinking a lot more on the pitch. Playing with Bengaluru FC gives you a name, because it is a club with a lot of reputation. My parents are from Assam, but we’ve been settled in Bengaluru for a while now. I was born here and getting the chance to represent this state gives me and my family a lot of joy,” said Parikram, who is also the youngest member of the Karnataka U14 squad.

Coach Rajan believes that the selection of his players is something that the club’s youth system can be proud of. “Parikram and Gautam are technically very good, and have been selected over some players who are physically superior. This shows that they have implemented the things they have learned in training and their ability to adjust to a different philosophy. We are all very proud that they have been selected and the club wishes them the best of luck playing for Karnataka!”